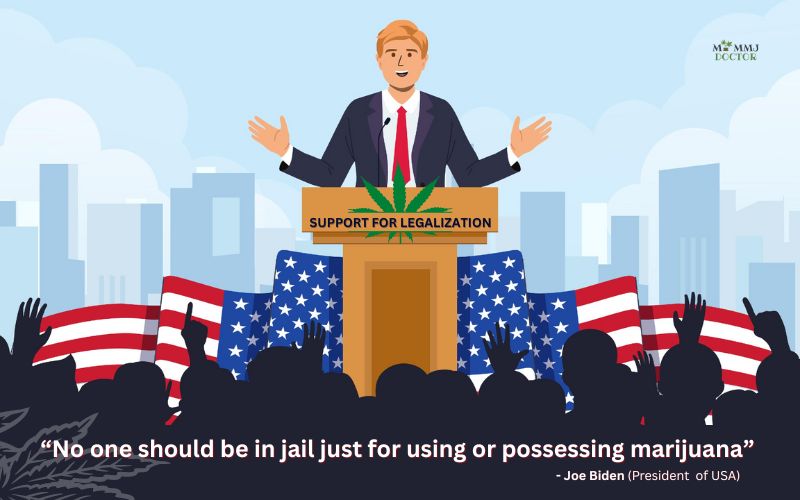 During Joe Biden’s election campaign in the 2020 United States presidential election, Joe Biden supported decriminalizing marijuana. “Nobody should be in jail for smoking marijuana,” Biden told voters at a house party in Nashua, New Hampshire. Mr. President believes marijuana should be decriminalized and that decisions on legalization should continue on the state level.

Just before the midterm election, Mr. President is taking his first significant steps toward decriminalizing marijuana. Fulfilling a campaign pledge to pardon thousands of individuals convicted of possessing marijuana, saying the current system “makes no sense” and urging governors to do the same.

Joe Biden, on 6 October, pardoned all prior federal offenses of simple marijuana possession. Senior administration officials said the pardons would affect about 6,500 people and thousands more in the District of Columbia who have been the victims of this country’s failed war on drugs. The president also directed his administration officials to review whether marijuana should continue to be listed as the schedule 1 substance reserved for the most dangerous drugs, including heroin, LSD, and ecstasy.

“No one should be in jail just for using or possessing marijuana, It’s legal in many states, and criminal records for marijuana possession have led to needless barriers to housing, educational opportunities, and employment,” Biden said. Furthermore, he said, “Too many lives have been upended because of our failed approach to marijuana. It’s time that we right these wrongs“.

After the Biden statement, some governors quickly reacted. North Carolina’s Gov. Roy Cooper and Attorney General Josh Stein said they support the president’s move and urged the Republican-led state legislature to decriminalize possession of small amounts of marijuana. Pennsylvania Gov. Tom Wolf (D) said, “I’m doing everything I can to right the wrongs of the failed war on drugs.”

Erik Altieri, the executive director of the National Organization for the Reform of Marijuana Laws (NORML), said it was “incredibly historic” since no sitting president had previously initiated a formal review of marijuana’s classification.

No doubt, reclassifying the category of marijuana could end decades of misalignment between state laws that ban marijuana and state laws that permit it. Kassandra Frederique, executive director of the Drug Policy Alliance, advocates for easing drug laws, said almost one-third of Americans had eagerly awaited this type of announcement.

According to research by the American Civil Liberties Union (ACLU), between 2010 and 2018, there were 6.1 million arrests in the United States for marijuana possession. In 2018 alone, police made more marijuana arrests than for all violent crimes combined.

In his statement, Biden wrote that significant limitations on trafficking, marketing, and underage sales would remain in place, even if marijuana let off the category of schedule 1 drug.

Marijuana is illegal under federal law, even as individual states legalize the use for both medical and recreational purposes. Since 1970, marijuana has been listed on Schedule 1, which means “no currently accepted medical use and a high potential for abuse.”

But now, more than three dozen states allow medical marijuana, and more than a dozen states like Alaska, California, Colorado, and New York allow adult or recreational use of marijuana. Still, it remains illegal at some states and federal levels. Furthermore, states such as Arkansas, Maryland, Missouri, North Dakota, and South Dakota have initiatives on the ballot this fall seeking to legalize the recreational use of marijuana.

A senior official said Biden’s pardons would be issued through an administration process overseen by the Justice Department. Those eligible for the pardons would receive a certificate showing they had been officially forgiven for their crime. Marijuana Decriminalization Associated With The Decreased Use Of Alcohol, Nicotine, And OpioidsTable of Content Introduction What Does The Reserach Say? Does Marijuana Use Lead To Hard Drug Initiation? A new study published in the Journal of...