What are Cannabis Concentrates, Oils, and Extracts?

Home » What is cannabis, concentrates, oils, and extracts? 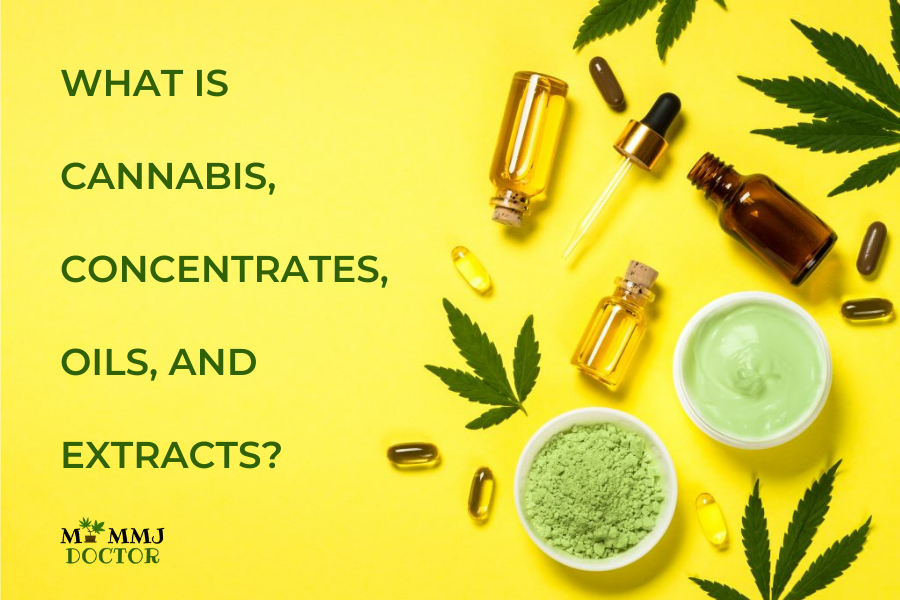 Cannabis is an unprocessed plant full of worthwhile hydrocarbons, cannabinoids, and exquisite resins. Cannabis concentrates, oils, and extracts are the processed form of cannabis that proffers the unique benefits that are hard to acquire from the unprocessed one.

These three have changed the way of consumption of Cannabis. The Cannabis oil concentrates, and extracts are generated from a cannabis flower. Let us take a look at these three and their consumption methods.
My MMJ Doctor is a one-stop solution for all the needs for acquiring an MMID Card and facilitates in providing the finest solutions for all your questions.

A Cannabis Concentrate or Marijuana Concentrate is a highly potent cannabis-medical-vs-recreational THC and CBD that are the primary constituents of Cannabis concentrated mass. The concentrates are comprised of too high THC levels. Volatile solvents, namely butane, propane, ethanol, and hexane, are used to prepare extracts. Concentrates are available in different forms out of which few are distinguished by the method of their extraction while others are determined based on the texture. Concentrates are generated through the power-driven processes that isolate valued resin heads.

Kief It is the simplest form that utilizes the sieves to separate trichomes from the dry cannabis buds to generate a fine golden powder. A multi-chamber grinder is necessary for this process. Hash Hashes are made up of compressed trichomes that are separated from the cannabis plants. Trichomes are the resin glands of the cannabis plant and are highly potent. There are ample of traditional techniques that are still in use, but with modern technologies, it has found some innovative ways to refine the cannabis. Hashes can be extracted in three ways. Dry-Sift Hash Hash can be made from cannabis by utilizing plenty of processes. The most common procedure that is used frequently is ice water extraction. It is used to generate the quality non-solvent hash. The main idea behind the ice water extraction is to isolate the trichome heads. After the extraction, the essential part is to dry the final product. Another most commonly used method is by gathering the sifted kief and then heating and pressing into dark and chocolate-like blocks. Rosin This is generated by pressing cannabis while applying heat that banishes the hash oil to extract a thick golden resin. These are generated from the hash, kief, flower, or some combination. It is more translucent as compared to other concentrates. Bubble Hash Bubble hash is generated utilizing ice water, agitation, and bubble bags to eradicate the trichomes from frozen cannabis buds. This operates at a cold temperature that facilitates in removing trichomes. Bubble Hash varies in the quality and size of the mesh required to gather the trichomes. More satisfactory the mesh, the higher the quality.

How to Use it?

Vaporize, Smoke, or Dab are the ways of utilizing hash. A pressed concentration of the sticky glands of the cannabis plant can be vaporized or smoked for the immediate effects.

Cannabis oil is referred to as Cannabidiol (CBD) oil that originates from the cannabis plant. Cannabis oil includes ample health benefits and comprised of an extensive range of components with varying effects.

CBD Oil: It is a type of non-intoxicating product that is widely used for treating several health conditions. It is usually available in capsule or tincture form. THC Oil: It is a form of intoxicating oil that is widely used medically. An individual can opt for any of the forms like vaporizers, tinctures, or capsules. Ingestible Oils: These are the activated oil that can easily be consumed with food in capsule form. Vaporizer Cartridges: These are easy to dose oil attachments paired with batteries. These are portable to use and are available in the form of e-cigarettes.

The use of solvents generates the extracts. These solvents are responsible for chemically extracting the THC and or its components. The most commonly used solvents are Propane, Butane, Ethanol, and CO2. The final extract will have distinct characteristics, appearance, potencies, and flavor.

For the generation of CO2 Oil, Carbon Dioxide, and pressure is used to extract the terpenes and Cannabinoids. By utilizing the CO2 as a solvent, the final extract is considered as a cleaner. The resultant product generated by this is thick oily liquid and is generally available in the form of vaporizer pens and cartridges.

BHO referred to as Butane Hash Oil is generated by placing the plant matter in an enclosed column and then washing the butane over it. Later the solvent is recovered and pulls out the CBD, THC, and terpenes. These are then poured out in a thin sheet and placed in a vacuum drying oven.

It is a type of Butane Hash Oil utilizes a solvent to extract the cannabinoids and terpenes from the cannabis plant. Live Resin formed from the fresh flowers that have been frozen and release a resultant product of sticky and sugary extract that can have several textures and helps in preserving more terpenes and flavors. Later a vacuum drying oven is used to remove any remaining solvents.

The method of extracting the PHO is analogous to BHO, except the fact that the solvent used is propane as a substitute for butane. The resultant product is nearly always a budder. PHO operates at a higher pressure throughout the extraction, but a lower temperature during removal. Tinctures: A Cannabis-infused liquid that must be ingested orally by dropping under the tongue. Tinctures generally require 20-30 minutes to effect. Capsules: Capsules are Cannabis-infused oil-filled that must consume orally. These capsules might take up to two hours to effect. Vaporizer Cartridges: The oil fills cartridges that are attached to a battery and individuals must vaporize by taking a puff. Wax, Shatter, and Dababble Oil: It is a type of oil that is extracted by a solvent that must consume orally.