Can Medical Cannabis and Antibiotics be Consumed Together? Is it Safe?

Home » Can Medical Cannabis and Antibiotics be consumed together? Is it Safe? 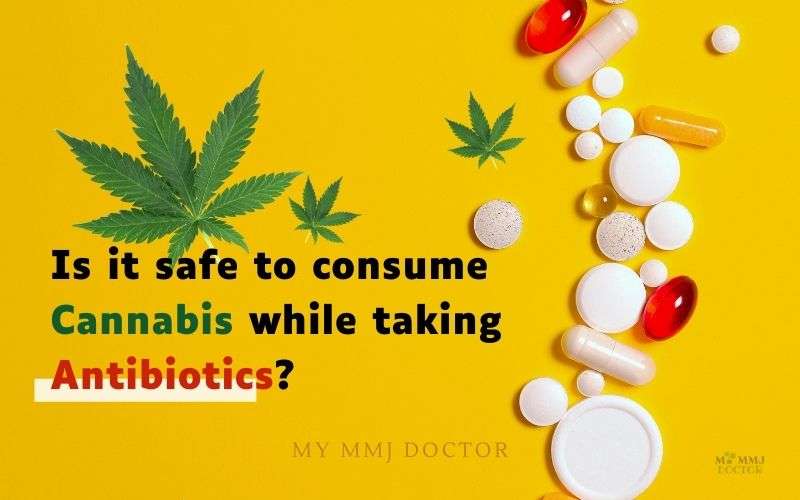 Cannabis has relieving and curative properties to help you deal with ample health conditions and relieve some potent symptoms.

People are increasingly inclined towards cannabis use to handle ample symptoms. The topmost one is chronic pain, relaxing the muscles, fighting anxiety or depression, making one feel better, and many others.

Cannabis is a potent anti-inflammatory substance that continues to increase consumption across the globe.

However, The Essential Thing to be Answered Here is What Exactly Happens When a Person Takes Antibiotics?

Since several inflammatory-based health conditions, chronic pain, and diseases have a treatment plan that includes antibiotics. And that is why it is essential to have complete information on the drug interactions with Cannabis, so you benefit from the treatment.

The research is still ongoing about identifying the interaction of Cannabis with other drugs and how using Cannabis can benefit them.

Well, let us get acquainted with everything you need to know about the antibiotic drug interaction with medical Cannabis.

Antibiotics have been well known to render specific medications when consumed simultaneously due to the drug interactions.

Whenever the treatment plans are complicated by the interacting drug’s consumption, including CBD, either drug levels can become changed. And this may pose a health risk.

A systematic review study done in 2014 suggests that the THC, CBD, and CBN interactions with antibiotics are usually low risk as per the currently available data. However, the research on the same is still essential to identify the particular effects.

However, some particular medicines can be used with caution in conjunction with CBD. So, in short, you need to tell your doctor about marijuana use.

Antibiotics have been well known to render specific medications when consumed simultaneously due to the drug interactions.

Whenever the treatment plans are complicated by the interacting drug’s consumption, including CBD, either drug levels can become changed. And this may pose a health risk.

So What Are the Common Antibiotics?

Antibiotics are frequently used to prevent and treat the spread or contraction of bacterial infections.

According to the NHS, antibiotics are used to

Luckily, no evidence suggests Cannabis may not significantly interfere with antibiotics.

However, the rifampin antibiotic can lessen the CBD levels when taken together.

But cautiously, you should follow the essential instructions concerning adding the other metabolized drugs in the same manner.

Though more research is required to determine the accurate effects and safety of antibiotics and cannabinoid co-administration, it must be done cautiously.

Moreover, Cannabis has antibacterial properties that prove somewhat effective against the challenge of treating MRSA bacteria.

So it is only a matter of time till the doctors are ready to include Cannabis in the antibiotics regimen for the patients having trouble kicking out a nasty infection.

But based on the limited data concerning it to date, you can use Cannabis while on antibiotics. But do not forget that a qualified medical professional must monitor the entire treatment.

Is it safe to Consume Cannabis While on Medications?

Based on the data and information to date, antibiotics consumption will still be adequate with Cannabis. But certainly, that does not indicate that you have no risk.

So, to answer the query that does marijuana affects antibiotics probably has the answer that it doesn’t affect it but the risks are there.

It is essential to understand the various metabolic pathways in the liver. This metabolic pathway is the same that processes cannabinoids and is also the one used by several prescription drugs, including antibiotics.

But that is really not a problem. Despite using the same metabolic pathway, the medications do not interact negatively with Cannabis.

And if in case they do interact this way, the interactions reported till now are not so life-threatening.

However, ensuring the same can be complicated to accept. But the interactions need to be thoroughly discussed with a medical doctor.

This works on a phrase that not one size fits all, so a drug interaction may not affect a person at all but, on the contrary, may include side effects if consumed by others in the same way.

When Not to Use Antibiotics With Cannabis?

If your medical practitioner recommends you not to use Cannabis with antibiotics, you should follow their advice.

There are certain instances when Cannabis may actually exacerbate the issue, which might also depend on someone’s health that may risk your general health.

So you should notably follow their advice if they recommend not using Cannabis with antibiotics.

What Alternatives to Cannabis Can You Choose While Taking Antibiotics?

Since the Cannabis likely may not negatively affect the person and interact with the antibiotics, several people may still consider choosing alternatives to the Cannabis.

One viable solution to finding an alternative is consuming Cannabidiol isolate products. But do not forget to avoid a broad spectrum and full CBD products.

By doing this, the potential risks are also diminished as the intoxicating cannabinoids, and additional psychoactive substances are also reduced.

The Alternative to Cannabis While Taking Antibiotics Include:

Since research studies suggest that Cannabis has antibacterial properties of its own, this is the common question that is often asked: Can Cannabis replace antibiotics?

As antibiotics are often used to deal with bacterias and Cannabis also have antibacterial properties, so it is common to get confused with it.

An Italian study in 2008 studied the antibacterial effects of the five major cannabinoids found in Cannabis are Cannabidiol, tetrahydrocannabinol, cannabinol, and cannabigerol cannabichromene.

Since no evidence concludes Cannabis can replace antibiotics. However, the research doesn’t suggest that Cannabis may complement rather than disrupt conventional antibiotic use.

It is not much known how Cannabis interacts with the medications, but you should consult your doctor before deciding on taking the antibiotics with Cannabis.

This indeed presumes that you are worsening any of the infections and are well aware of the potential side effects that the person can experience.

Since Cannabis has got a legal status in ample states, and if it is legal where you live, bringing questions and doubts concerning drug interactions and cannabis consumption are always welcome.

The best way to get the answers is to connect to the medical doctor immediately if you have any doubts. What are Medical Marijuana Laws in Texas?