Marijuana Decriminalization Associated With The Decreased Use Of Alcohol, Nicotine, And Opioids 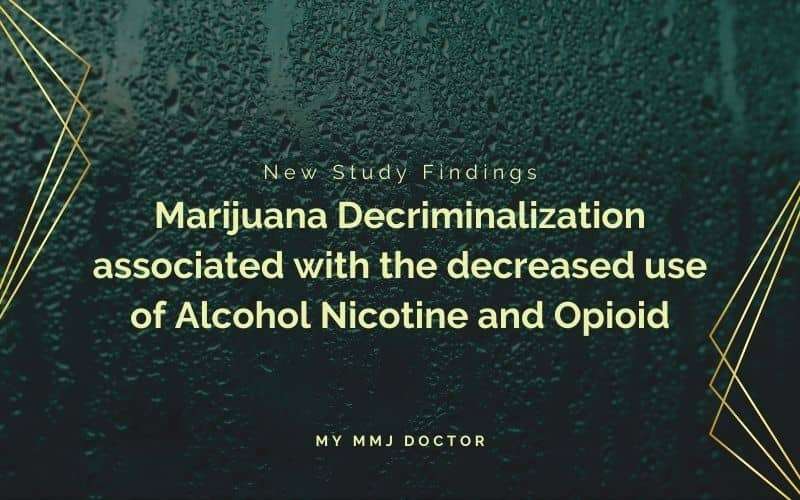 A new study published in the Journal of Adolescent Health suggests marijuana decriminalization is linked to the decreased use of nicotine, non-prescription opioids, and alcohol among young adults.

Is it really true?

Does this statement actually suggest this?

My MMJ Doctor news blog is again ready to give a complete piece of information on this.

What Does The Research Say?

The researchers with the University of Washington evaluated the present trends in the use of alcohol, non-prescribed pain relievers, and nicotine among the 12500 young adults cohort in Washington state.

This study analyzed the data on the use trends of substances from the year 2014 to 2019.

It indicated that the people aged between 21 to 15 were less likely to consume more dangerous drugs after cannabis legalization in the state.

The researcher’s evaluation reported
“The implementation of decriminalized non-medical marijuana coincided with reducing cigarette, alcohol and pain reliever misuse.”
The also added
“The weakening cannabis use associated with the other substances used among adults aged 21 to 25 needs further study and evaluation. Still, it suggests the enhanced importance of marijuana-specific treatment and prevention efforts.”

Weed is the Remedy!

The researchers also discovered the prevalence of past-month e-cigarette use augmented after legalizations.

Post this statement, the authors of the research findings also concluded that
“There is evidence with the findings that the non-medical cannabis legalization has not led to the dramatic boost in the use of non-prescribed opioids, cigarettes, and alcohol.”
However, these findings indicate most critical public health concerns about the cannabis decriminalization and legalized cannabis markets evolution may be specific to the marijuana use and associated consequences.

While commenting on these research study findings, Paul Armentano, the Deputy Director of NORML’s said:

The real-world data from decriminalized cannabis states disputed the longstanding claims that cannabis is like a gateway substance. In fact, cannabis decriminalization is more linked to the decreased use of various other substances, including several prescription medicines.

To this point, another research study indicated that cannabis decriminalization is more concerned with the reduced use of many prescription drugs for the treatment of various health conditions like sleep, anxiety, and seizures.

Several recent studies have also recognized the association between the medical cannabis decriminalization enactment at the state level and decreased pharmaceutical prescriptions.

However, at the same time, a study discovered that medical cannabis use is linked to a significant reduction in individuals’ dependence on opioids and several other prescription drugs and enhances the quality of life.

A meta-study published in 2020 also indicated that cannabis delivers a promise as a promising treatment option for chronic pains; however, another suggested that cannabis use can alleviate the opioid withdrawal symptoms.

Does Marijuana Use Lead To Hard Drug Initiation?

Rather ample prior studies, including the National Academy of Sciences and The RAND Corporation, disputed this “gateway theory” about cannabis and concluded their opinion with a statement.

“CANNABIS HAS NO INFLUENCE OVER ANY HARD DRUG INITIATION”

And astonishingly, as per the nationwide polling, most Americans no longer agree with the statement that “marijuana use leads to the use of any hard drugs.”