Get Your Arkansas Medical Marijuana Card With My MMJ Doctor

★★★★★ – 689+ 5-star Reviews
Getting An Medical Marijuana Card In Arkansas is straightforward. Consult with an Arkansas Medical marijuana doctor and get your recommendation, all done from your phone.

Submit our online application to book your next appointment Now. How to Get a Medical Card in Arkansas

Start by briefing your medical condition and your personal information. You’ll have to input this information into a form specially designed for Arkansas medical marijuana card seekers. Lastly, submit the appointment form.

In next step, you will be connected to an Arkansas Medical Marijuana Doctor who will diagnose your medical condition. After getting evaluated, the doctor will approve your request and register you with the Arkansas board of Medicinal Marijuana.

In the final step, you will register yourself as a patient with the Arkansas Department of Health. After 2 weeks of registration, you will receive you card in mail. Ivy Wilson
“Easy Process Flow”
My MMJ Doctor made the process of getting a medical marijuana card simple. I got my appointment and recommendation the same day. Now I am waiting for my card. Hence, they are dynamic with immensely efficient services. Byran Taylor
“Immediate and Experienced”
The medical experts of My MMJ Doctor are highly experienced and skilled in their work. Initially, I was tense, but they made me comfortable during the video conference while evaluating my medical concern. Hence, my experience was great. Madison Evans
“Constant Assistance”
The health experts took complete care and cleared all my doubts before and after the enrollment. They ensured better evaluation conditions and helped me better explain my health concerns. I genuinely recommend My MMJ Doctor.

What is a Arkansas Medical Marijuana Card?

An Arkansas Medical Marijuana Card, also known as a cannabis card, is an identification card used by patients to purchase marijuana to treat their corresponding health ailment. The patient must get a signed recommendation letter from a licensed healthcare professional then the medical cards are approved by the state. The recommendation letter states that patients experiencing illness and medical cannabis may alleviate the symptoms.

Medical Marijuana has been legalized in Arkansas since November 2016, when measure issue 6 got 53 percent approval for ailing patients who have prescribed drugs for treating chronic pains. Since then, Arkansas has added amendments of dozens of health conditions to the list of qualifying health conditions.

Any other health condition approved by the Arkansas Department of health is also included in the list of qualifying conditions. Issue 6 also endows with a scheme for the qualifying patients to possess, cultivate, and distribute medical marijuana with a written recommendation from a medical doctor. Apart from this, like many other US regions, a checkbox placed by the land of opportunity in the November 2020 election ballot seeking an opinion from citizens to vote concerning the Recreational use of medical marijuana.

Laws Concerning the Use of Cannabis in Arkansas

A patient needs to meet the criteria for a few health conditions to get a valid Medical Cannabis Card in Arkansas. The list includes:

How Much Marijuana Can You Buy at a Dispensary With or Without a Arkansas Medical Card?

Who Can Become a Cannabis Caregiver In Arkansas?

Becoming a caregiver in the state of Arkansas starts with requires a person to be above the age of 21 years with a valid driver’s license or state ID. For becoming a caregiver, an annual fee of $50 is required to be paid by the individual during registration.

In Arkansas, every patient can have two caregiver and every caregiver can serve two patients.

What are the Cultivation Limits for Marijuana Plants In Arkansas?

Shield Against The Law

In Arkansas, recreational use of marijuana is not lawfully permitted. However, with a medical marijuana card, patients can safeguard themselves from legal troubles. In case they are ever questioned by legal authorities regarding the possession of cannabis, medical marijuana cards can protect them. The card represents medical use; hence, individuals will be covered.

Marijuana is subjected to certain taxes. Once the taxes are imposed, the overall costs increase significantly. However, possessing a medical marijuana card can turn the tables. The taxation limit is drastically reduced; thus, the costs reduce. It ultimately leads to speedy recovery without spending much.

Generally, to possess marijuana, individuals need to be over 18. However, with a medical marijuana card, the age barrier is removed, and patients whose health concerns qualify for the eligibility criteria can possess and consume medical marijuana. Although, for individuals less than 18, a legitimate guardian or parent is needed. They act as caregivers and can effectively purchase cannabis on behalf of patients.

Why Should I Get A Medical Marijuana Card In Arkansas?

What Is The Cost Of A Medical Marijuana Card In Arkansas?

How Much Time Does It Take To Process My Application In Arkansas?

The processing time, including evaluating the application form and scrutinizing the details, takes around 10 to 14 days. So, don’t hit the dispensaries immediately as you need to wait for 10 to 15 days.

When Does The Medical Doctor’s Recommendation Expire?

Can I Use Medical Marijuana Anywhere In Arkansas?

Nope! Utilizing Medical cannabis is not allowed in public places. It is strictly prohibited in school buses, on the grounds of primary or secondary school, in any motor vehicle, in areas where smoking is not permitted, or any public place where the others observe the individual. A patient must consume Medical Marijuana in Arkansas in a private location or a personal residence only.

Do I Need A Caregiver Card To Purchase Medical Marijuana From State Dispensaries For My Child?

Can A Caregiver Also Be A Registered Patient?

Yes! A caregiver can also be registered as a qualifying patient.

What Documents, Forms, And Information Are Required When A Patient Applies For A Medical Marijuana Card In Arkansas?

The Arkansas state has passed a list that is counted as essential while applying for a Medical Marijuana Card. The documents include:

How Long Is My Medical Marijuana Card Valid in Arkansas?

A valid Medical Marijuana Card is valid for one year from the date of issue. The patient must apply for the renewal of the card before the expiration date.

Can A Caregiver Have More Than One Patient?

Yes. A caregiver can serve more than one patient. The caregiver must apply for a registry card for each patient and pay a mandatory fee of $50 for each card.

I Live In Another State, But I Have A Debilitating Qualifying Condition. Can I Consume Medical Marijuana Legally In Arkansas?

Can I Obtain A Qualified Patient Or Designated Caregiver Registry Card If I Am A Member Of The United States Military Or Arkansas National Guard?

As per the legislation passed in 2017, the state legislature prohibits the United States military and Arkansas National Guard from obtaining a qualified patient card or designated caregiver card.

Will I Be Given A Temporary ID Card Until My Medical Card Is Received?

The Arkansas Department of Health does not issue temporary ID Cards until the application card is processed completely.

Can Other Medical Conditions Be Added To The List?

Patients suffering from debilitating health conditions that remain unaffected after consuming strong medications as well, then patients can request the department for the consideration of the illness. The department shall deny or approve the request within 120 days of submission of the request.

How Much Medical Marijuana May I Possess As A Qualified Registered Patient?

The qualified registered patients can possess and purchase up to 2.5 ounces from a state-licensed dispensary every 14 days.

Can I Grow My Own Medical Marijuana? What are Medical Marijuana Laws in Oklahoma?

What are Medical Marijuana Laws in Oklahoma?(2022) Written By Garry StewartTable of Content Introduction Who Can Apply? Possession Limit Employment Rules Where is it Safe to Consume? Bottom Line On 26 June 2018, Oklahoma voters approved State... 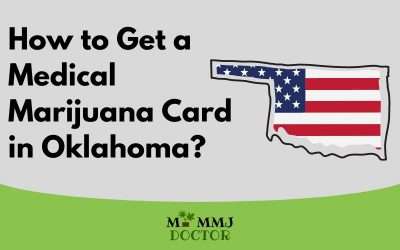 How to Get a Medical Marijuana Card in Oklahoma?

Cities we Cover in Arkansas