Get your Medical Marijuana Card from Top MMJ Doctors in Illinois

Consult with an Illinois Medical marijuana doctor and get your recommendation, all done from your phone. Getting An Medical Marijuana Card In Illinois Was Never This Easier Before. Submit an online application to book your next appointment Now.
Apply My Card Now We Simplify Your Doctor Visits

Start by briefing your medical condition and your personal information. You’ll have to input this information into a form. Lastly, submit the appointment form.

Next up, you’ll be evaluated by a medical marijuana professional. You’ll receive your appointment details over email. Once connected, discuss your ailments and collect as much information as possible concerning your health, how medical marijuana can improve it, and the best treatments available. The doctor will approve your application after completing the session.

After acquiring a doctor’s recommendation, you must register with the state. To become a registered patient, you will pay an additional state fee of $100 for one year, $200 for two years, and $250 for three years’ non-refundable application fee. After submission, the state will process your application, and after completion they will mail your card. After receiving your card, you can begin purchasing marijuana from Illinois dispensaries.

Experts Recommend My MMJ Doctor as a Secured, Streamlined Way to Access to Medical Marijuana Card.

Team My MMJ Doctor values the privacy of customers. We make sure your information will be secured with our HIPAA-compliant platform. Firstly I thought, It will be a long time-consuming process. But only after filling up my details, I was asked to fix my appointments, and guess what! It was the best online call session as doctors were so cooperative and Professional. And, got my Medical Marijuana card in a few days. “A helpful Process”
A helpful process of getting a Medical Marijuana card online. The therapist was polite and professional during my online video session. I recovered from my anxiety issue by taking Marijuana on a daily basis as recommended by health professionals. I suggest it to everyone. “Instant & professional”
The Process was quiet instant and professional. I filled up my details, and then I was asked to fix an appointment with the medical health professionals. Everything went online, the session was good, and after approval, they send me my Medical Marijuana card by Email.

We are serving many patients each day to get their Illinois medical marijuana cards online. We have a 100% money-back guarantee policy in case a person won’t get approved. Our licensed medical health physicians provide Medical Marijuana recommendations to the patients quickly and professionally.

We provide secure services in Illinois for people who are seeking medical help. For getting a medical marijuana recommendation, you can trust our platform as our services are under HIPAA appliances.

My MMJ Doctor offer you with the easiest-to-go online application. You won’t be jumping in between pages too much to get your Illinois medical marijuana card. Our application only requires you to complete 3 easy steps, and once you’re done with one step, you will be redirected to next automatically.

While making an online transaction your details may get stolen if the website is unsecure. But, with My MMJ Doctor, every online purchase that you make is encrypted by SSL, and no 3rd party can collect the information you enter in our online portal.

Looking for a provider who can make your online experience easy. Well, this is what we do everyday. Our next generation digital portal takes care of everything from connecting with a doctor to delivering your recommendation for medical marijuana on time.

At My MMJ Doctor, we are not after your money but after the care that your health needs badly, and that is why our service is backed up with a 100% moneyback guarantee if you are not approved by our health care professional for any reason.

We assure you that you will get the best possible treatment with My MMJ Doctor. Illinois medical marijuana doctors working with My MMJ Doctor holds years of experience to prepare customized wellness plans as per the  you medical concerns.

My MMJ Doctor
v/s
Other Services

May take a week

What is a Medical Marijuana Card?

A medical marijuana card, also referred to as a medical cannabis card, is a document issued by the state or a doctor authorized to provide recommendations for the use of medicinal marijuana.

Having a recommendation for medical marijuana means that you are federally secure from all the problems you may get caught into for possessing, using, or growing marijuana.

An Illinois medical marijuana card is valid for 3 years maximum. After 3 Years you will be required to renew your registry by providing new documentation. 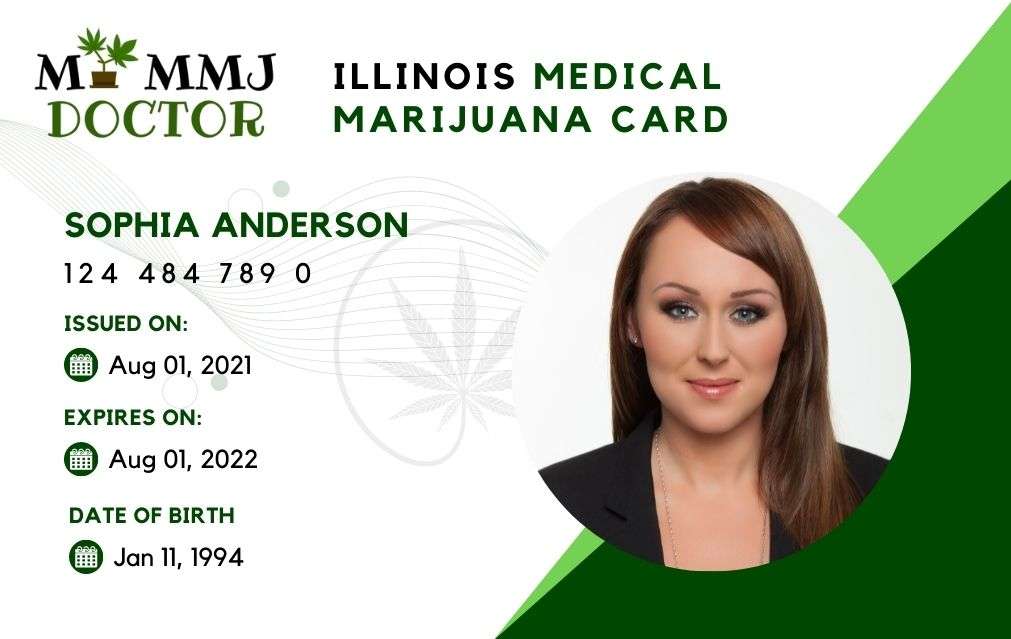 On the behalf of patients, caregivers, and doctors, the Illinois Department of Public Health oversees the medical marijuana program.

How much marijuana can you buy at a dispensary in Illinois with or without a medical card?

In Illinois, Medical Marijuana cardholders can hold over 2.5 ounces (71 grams) of medical cannabis and its products within 14 days.
The residents over the age of 21 in Illinois can possess marijuana only:

Out-of-state visitors patients who are over the age of 21 may possess only:

Who can become a Cannabis Caregiver In Illinois?

What are the Cultivation Limits for Marijuana Plants In Illinois?

In Illinois, only registered patients and caregivers may cultivate cannabis. Also, there are a few requirements that a grower must meet.

Medical Condition do not waits for an age limit. Anyone can experience one, But not everyone can access cannabis without a card as there is an age barrier defined by the state. For those having a illinois medical card, State have offered a relief, as patients over 18 can possess marijuana.

Medical Marijuana is indeed essential for the treatment, but is pricey too! Getting a MMJ Card in Illinois can save you 100’s of bucks as the state that exempts patients from paying a certain limits of taxes. The Limit varies in every state.

Better Quality means Better Treatment, even if the consume cannabis in less quantity. Though every individual over 21 can possess cannabis without a card in some states, they are not allowed to possess products with high potency. On the contrary, medical card holders Can!

What are the qualifying conditions to get your Illinois medical marijuana card?

To register as a patient, one must have at least one of the following debilitating conditions that are as specified in the Compassionate Use of MCPPA:

What Is the Age Limit to Legally Access Medical Marijuana in Illinois?

18 Years. If you fall under 18, the parent’s consent is required.

Does Illinois allow medical cannabis reciprocity with other states?

Where Can I Purchase Weed in Illinois?

Designated patients and caregivers may legally purchase medical cannabis from a Marijuana dispensary in Illinois.

Where is it Safe to Consume Cannabis in Illinois?

What are the documents required to register a caregiver in Illinois?

To register as a caregiver in Illinois, a candidate:

Is Residence Cultivation Allowed in Illinois?

Only designated patients and caregivers may cultivate cannabis in Illinois. Also, the patient should not contain more than five plants. Make sure the plants should not be more than 5 inches in height.

Is Weed Legal in Illinois?

Yes, Both medical and recreational cannabis is legal in Illinois. What Is Decarboxylation? How To Decarboxylate Cannabis?Published Date: May 25th, 2022; Author: Dan Sharp.Despite the medicinal benefits and increasing popularity, the public still has to understand and learn about cannabis. This may include the... How to get a medical cannabis card in Minnesota?

How To Get a Medical Cannabis Card In Minnesota? Requirements And Updated State Laws - 2022Published Date: May 24th, 2022; Author: Dan Sharp.Medical Marijuana has been used since early times to deal with ample health conditions. And surprisingly,... Marijuana Decriminalization Associated With The Decreased Use Of Alcohol, Nicotine, And OpioidsPublished Date: May 21st, 2022; Author: Dan Sharp.A new study published in the Journal of Adolescent Health suggests marijuana decriminalization is linked...

How to Get a Medical Marijuana Card in California?

How To Get A Medical Marijuana Card In California? Requirements And Updated State Laws - 2022Published Date: May 17th, 2022; Author: Dan Sharp.Are you looking for ways to access medical marijuana legally in a state where recreational use is already... 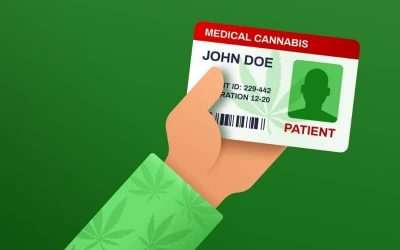 How To Get A Medical Marijuana Card?

How To Get A Medical Marijuana Card?Published Date: May 2nd, 2022; Author: Dan Sharp.Medical Cannabis and its benefits have been known for years and indeed have been used since an early age. But presently, realizing the health benefits of the... Does Infrared and Ultraviolet Light Matter When Growing Cannabis?

Does Infrared and Ultraviolet Light Matter When Growing Cannabis?Publish Date: April 27th, 2022; Author: Dan Sharp.When plants are grown, the lighting and natural environment play a crucial role. And when plants are grown naturally, they receive a... 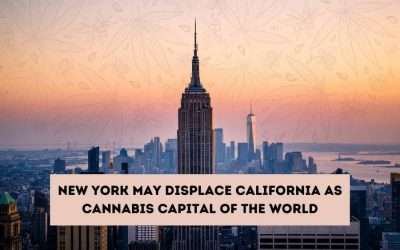 New York May Displace California as Cannabis Capital of the World

New York May Displace California as Cannabis Capital of the WorldLast Updated: April 19th, 2022; Author: Darren M. Jorgenson.Proposition 64 has passed the adult-use legalization framework of Medical Marijuana in California. In 2016 the voters passed... How Marijuana Interacts With The Human Brain?

How Marijuana Interacts With The Human Brain?Publish Date: April 14th, 2022; Author: Darren M. Jorgenson.After inhaling the marijuana smoke, its chemicals zip all the way through the body. THC is considered a potent chemical compared to several other...

Cities we Cover in Illinois