Get Your Puerto Rico Medical Marijuana Card With My MMJ Doctor

★★★★★ – 931+ 5-star Reviews
Connect with a Professional who understands your needs for medical marijuana from the comfort of your home, conduct an online session, and acquire your recommendation for a medical cannabis card in Puerto Ricco.
Apply My Card Now How to Get a Medical Card in Puerto Rico?

Sign up for the video conferencing session with a physician accredited by Medicinal Cannabis Regulatory Board. Our MMJ physician will contact you at a time that fits your schedule. They will ask you what makes you believe that MMJ could help.


During the time of the video session, the doctor will ask you questions concerning your health. They will approve you based on your answers. If you have other queries too, feel free to ask them. The overall consultation session may take 15-20 minutes.


After the doctor approves, Register with State, fill-up the required documents, and “Submit”. Nowadays, it is easy to submit all forms at the official MCRB Portal. You’ll have to submit residential proof, State I.D., and other info mentioned in the application.

Our Best-in-Class customer service, Easy-to-go Application Process, and HIPAA compliant policies are what places us on top of the list of Best Marijuana Card Provider in Puerto Rico State.

Kayla Brown
“Fantastic Experience”
Professionalism, at its best, is the perfect word to describe my experience with My MMJ Doctor. Everything was so quick and systematic that I didn’t need to wait for long. Their team is accommodating and supportive and you don’t need to worry about a single step. It was a fantastic experience. William Brandner
“Painless and Quick”
Finally, I found something closer to what exactly I was searching for! The process of getting a medical marijuana card with My MMJ Doctor was painless and quick. The doctor appropriately evaluated my health condition and prescribed the accurate dosage and essential information about the same. Thank you. Wilma Barth
“Easygoing and Stress-free Process”
I happily recommend My MMJ Doctor to everyone as they offer a simple process of obtaining a medical marijuana card. I was well-treated and assisted by the doctors. They are the best!

What is a Puerto Rico Medical Marijuana Card?

Here are some debilitating qualifying conditions that MCRB has included into their list. If a person is experiencing one on more from such conditions, they can apply for a medical recommendation.

History of Marijuana in Puerto Rico

As per Puerto Rico’s Legislation, there was a complete ban of possession, distribution, and cultivation Since 1932. This ban was removed in 2015, when the Governor of Puerto Rico, Alejandro J. García Padilla, signed an Executive Order OE-2015-010 plants to treat ailments afflicting the Puerto Rican population.
Puerto Rico is one among a few territories that have legalized the medical use of marijuana. Since 2015, as per the signed enactment, only those experiencing several debilitating medical conditions like HIV/AIDS, Cancer, etc., are allowed to use marijuana. Possessing, distributing, and cultivation of marijuana for recreational purposes is still a criminal offense.

In mid-2017, Alejandro Padilla passed Act 42-2017 which is termed “The Medicinal Act“. The Act succeeded in the governing order creating a legit framework for MMJ in Puerto Rico. The Medicinal Act proffered protection for MMJ Patients and ordinances for dispensaries and those involved in the marijuana business. After this Act, many state-licensed dispensaries became operational.

What Marijuana Products can I purchase from Dispensaries in Puerto Rico?

Did You Know
Apply My Card Online

Following are the benefits of obtaining a Puerto Rico medical marijuana card:

Puerto Rico does not authorize recreational cannabis. With a medical marijuana card, residents can effectively consume cannabis without being questioned by law.

Benefits Of Getting Medical Card From My MMJ Doctor


Getting a recommendation in Puerto Rico is a tedious and time consuming process. We have tailored it and made it as simple as possible, so you don’t face problems whenever you apply.


Patients are always concerned about online privacy, and that is what we understand completely. Our HIPPA Compliant Evaluations offer you 100% security of your personal information.


Everyone needs assistance at some point, which may be hard to find sometimes. We will be available for you whenever you want, You can simply reach our chat box or call us directly.
Apply My Card Online

How Much Marijuana Can I Purchase and Occupy in Puerto Rico?

If you are Registered as an MMJ Card Holder with MCRB, you can consume up to 1 ounce (28 grams) of marijuana flower or 8 grams of concentrated marijuana.

Can I Smoke Marijuana in Public Place in Puerto Rico?

In Puerto Rico, Smoking Marijuana is Illegal(Even in a private place), and Vaporizing isn’t. Also, Consumption of Marijuana is strictly prohibited in public place, you can only consume it in private homes or private places.

Can I Grow Cannabis in Puerto Rico?

Even if you have a recommendation, you still can’t grow marijuana for your own. Laws only permit buying weed from selected dispensaries only.

Can I Assign a Caregiver for Myself in Puerto Rico?

No, You can’t. Puerto Rico does not have any provisions that say you can assign one for yourself.

What Is the Age Limit to Legally Access PR Medical Marijuana?

The minimum age is 21 Years in order to get qualified for a medical card in PR.

Where Can I Purchase Marijuana in Puerto Rico for My Treatment?

You can buy marijuana products only from licensed dispensaries. Currently, there are 100’s of dispensaries available on the island.

I've a Medical Card from my Home State, I'm Just a Visitor Here, will it work in Puerto Rico?

Yes, Puerto Rico dispensaries welcome recommendations from the home state of the patients. 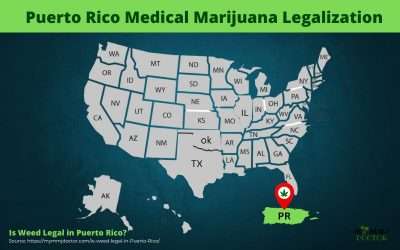 Is Weed Legal in Puerto Rico?

Areas we Cover in Puerto Rico