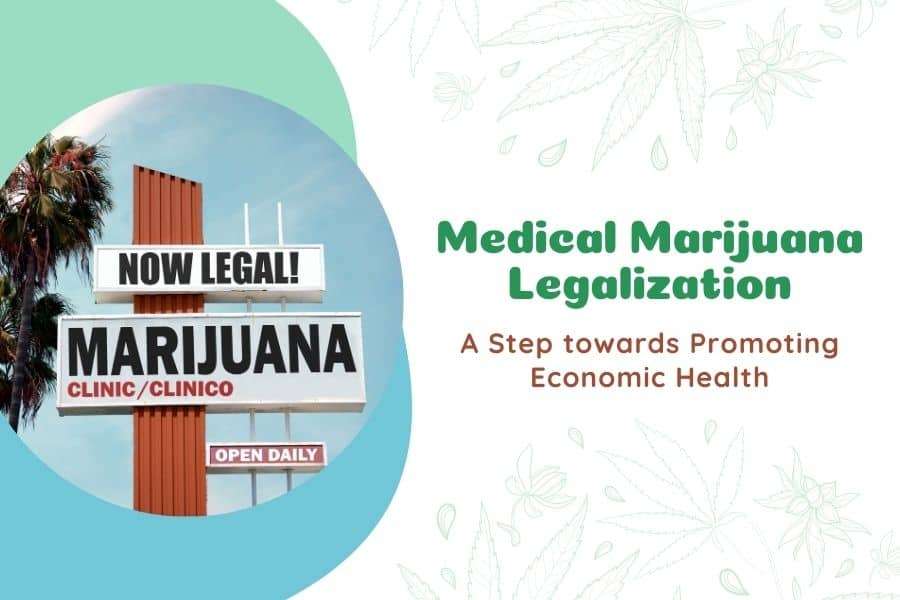 As the entire world’s economy is encountering severe setbacks due to the COVID-19 pandemic, several states have decriminalized the use of Medical Cannabis. A recent report indicates that medical marijuana legalization is expected to promote health and wellness and give a boom to economic health. With several reports and studies, it is clear that Medical Cannabis legalization may lead to impact the economy significantly.

The states legalizing medical marijuana consumption are not only taking the medicinal benefits but also witnessing the drastic helpful hand in promoting the economy and employment industry.

Is Medical Marijuana Legalization Helpful In The Economy?

Well, to your surprise, the answer to it is yes! As far as the economy is concerned with the legalization of Medical Marijuana, the setting up of marijuana dispensaries and nurseries will undoubtedly create jobs for people and set the ball rolling for the weed industries’ economic activities.

How Does Medical Marijuana Legalization Help Promote The Economy?

According to the statistics, you will know that the legalization of Medical Cannabis promotes economic health. Talking about the Colorado state, there was an increment in cannabis sales with $1.68 billion. And when it comes to talking about the entire united states, there was a dramatic increment of Cannabis sales in 2016, which was around $2.99 billion, which is expected to reach $31.1 by 2024.

Apart from the sales of Medical Cannabis, all the tax revenue generated from the Medical Cannabis sales goes directly to the state, which will help empower the local economy. Cannabis has been the most controversial drug. Despite being a plant, it has been an illegal drug for many years, and still, it didn’t get legal status in many states. Though some states have legalized medical cannabis use in treating debilitating conditions, others are still in the race to keep it illegal only.

The legalizing state legislatures also pass several restrictive laws to ensure the safe use of it. Though, the overall growth of the Medical Cannabis industry has decreased due to the pandemic. The pandemic has affected the cannabis products supply due to the lockdown and has led to a decrease in the sale to 1.50 percent, but the industry growth rate is still incredible.

Now that we have got enough data and statistics of medical cannabis being a helpful hand in empowering the economy, the essential question to analyze is whether it contributes to employment creation?

To answer the question directly, we can clearly say that yes, it is helpful in employment creation. Apart from being a natural remedy to treat several debilitating health conditions, the legalization of this curative plant also contributes to the employment industry.

If we specifically consider the California state, the legalization of cannabis consumption has marked as a hugely beneficial step for the state. In total, the state has generated approximately 81,000 new jobs in health care sectors, licensed dispensaries, and cannas cultivation. Such an incredible number of contributing to the whole employment sector, and the candidates required to get appointed for this get the legal rights to access marijuana legally.

As it is well known that Medical Cannabis consists of several constituents that have the natural curative properties to treat debilitating health conditions, it is also considered an affordable alternative to several prescribed medicines. People are well familiar with the medicinal benefits of cannabis and are choosing it over opioids or painkillers.

Obviously, it goes without saying that people prefer medications with no or fewer side-effects. Several allopathic medicines are heavy and may leave severe side-effects that are hard to deal with. Getting a natural substance as an alternative to it can be a savior. That is why people are more choosing Medical Cannabis treatment over heavy-dose medicines. Even the medical doctors are recommending it to alleviate the symptoms of a debilitating health condition.

Being a natural substance, medical cannabis is an inexpensive treatment for patients seeking health benefits. Instead of buying heavy painkillers or opioids to treat the health condition, people prefer the affordable alternative and replace the heavy dosages with natural treatment. The treatment also offers lower taxes and several other benefits that make cannabis worth its treatment.

The legalization of Medical Cannabis has turned out to be a drastic change in promoting health and well-being. Still, medical cannabis is showing up remarkable advantages to the Medicare industry. The states legalizing medical marijuana consumption are not only taking the medicinal benefits but also witnessing the drastic helpful hand in promoting the economy and employment industry. So, we can conclude that medical cannabis is not only contributing to the medicate industry but has also been a blessing to the economy and employment industries.

However, marijuana’s controversial status requires legal permission to access it. As we have discussed that the medical marijuana consumption is legalized under some of the strict laws for safer use, the Medical Marijuana Card is considered a standalone document that allows the patient to consume, possess, and cultivate marijuana legally. If you are looking for the same medical alternative to treat your debilitating health condition, the My MMJ Doctor can be the escape for you. Obtain a Medical Marijuana Card online with us and stay protected from getting trapped in legal issues. Reach us and take the health benefits today.