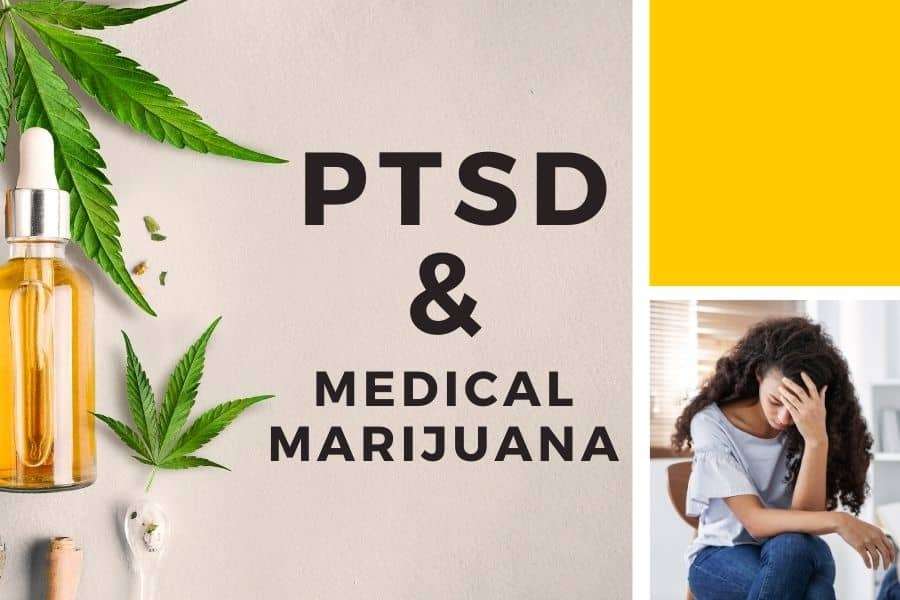 Post-Traumatic Stress Disorder, or PTSD for short, is a debilitating health condition in the list of qualifying conditions. PSTD is distinguished by avoidance, re-experiencing, and hyper arousal symptoms that are developed after experiencing a traumatic experience. Military veterans mainly experience and are vulnerable to higher rates of PTSD as compared to other populations. As per the research studies, a significant number of patients do not even fully recover from PTSD and results in a massive burden on social, personal, and economic levels.

Paroxetine and Sertraline are two approved medications for the treatment, despite demonstrations of significant neurobiological alterations and potential drug targets in PTSD.

However, both medications have limited effectiveness; pharmacists made some progress in making the drugs effective with some new mechanisms. Recently, there has been an augmented interest in the consumption of cannabinoids for treating PTSD.

A well-admired source of cannabinoids in cannabis comprises more than 100 diverse cannabinoids, of which tetrahydrocannabinol (THC) and Cannabidiol (CBD) have got the most attention. The patients often use cannabis to counter symptoms of PTSD with anecdotal evidence of success. However, several studies reported improvement in PTSD symptoms. Instead of a lack of evidence on the effectiveness and safety of cannabinoids for treating PTSD, the availability and acceptance of Medical Cannabis are ever-growing.

Marijuana comprises two primary constituents, CBD and THC, where THC is responsible for producing euphoric feelings, and CBD is a non-psychoactive element. Medical Marijuana comprised of lower THC content and higher CBD content is best for use as it lowers the chances of a person experiencing euphoria. People with PTSD can consume this form to reduce symptoms.

A study publication in the Journal of Psychoactive Drugs, 2014 examined the effectiveness of Medical Marijuana in alleviating symptoms of PTSD. The results concluded that patients diagnosed with PTSD experienced a 75 percent decrease in their symptoms after using medical cannabis. Also, stated that more evidence must be present to determine the effectiveness of Medical Marijuana for PTSD.

According to the researchers, the United States and Canadian population has the highest rates of patients who have PTSD in the world. As per a study in 2016, 7.2% of people in the United States and 9.2% of people in Canada experience PTSD. PTSD is a severe psychiatric condition that occurs with a cluster of other symptoms that can develop traumatic, scary, or dangerous adventures in people. These experiences can also involve injury, violence, and conflicts. However, some of the symptoms include bad dreams, fearful thoughts, and flashbacks that don’t ever go away. Patients with PTSD continue to experience the trauma reactions even when there is no actual threat to them.

People diagnosed with PTSD are considerably at a higher risk of suicide, Anxiety, and Depression. Many patients use Medical Cannabis to mitigate their symptoms. As far as the evidence is concerned, Medical Marijuana alleviates the symptoms of Anxiety and Depression.

What researchers have to say?

With the growth in health benefits of medical Marijuana, Professor Milloy and his colleagues wanted to determine whether the consumption of Medical Cannabis helps mitigate depressive episodes and suicidal thoughts in people diagnosed with PTSD. As the treatment options for PTSD are limited and so many people have taken to medicating with medical cannabis to alleviate the symptoms, says a study by Stephanie Lake.

According to the research study, Out of the people whose data was analyzed, the researchers found that 28.2% of patients with PTSD reported the use of cannabis in the last 12 months compared with 11.2% of patients without PTSD. Further, the analysis revealed that the chances of experiencing major depressive episodes or suicidal thoughts in patients with PTSD were much higher in the last 12 months among the non-cannabis users. The research analysis concludes with 7.2 times higher chances for depressive episodes and 4.8 times higher events for suicidal thoughts. However, there is a growing need for high-quality experimental studies concerning the investigation of medical cannabis and cannabinoids to treat PTSD.

What does Medical Marijuana do for PTSD?

Medical Marijuana has gained fame because of its increasing health benefits and has become a popular treatment method for patients with PTSD. While the research on this is limited, PTSD patients are stating benefits of medical cannabis have been noticeable, especially when it comes to sleep disturbances and anxiety.

The endocannabinoid system plays a significant part in the two biggest factors, including stress response and memory building. The CB1 receptor in the brains is accountable for extinction learning. It indicates that human can replace their old memories with new ones. By making these new memories, cannabis can help eliminate the panicked response that comes while reliving the memories.

Studies conclude that medical marijuana can be an excellent solution for relieving physical and mental symptoms of PTSD. The FDA has recently approved the consumption of Medical Marijuana for veterans with PTSD based on some findings. As the cannabinoid receptors are present in both body and mind, the science shows that medical marijuana treatment can help to alleviate the following PTSD symptoms:

The relief that Medical Marijuana offers to PTSD patients can reduce the risk of substance abuse and self-medication. These are the two significant risks related to PTSD. Research states that VA gave veterans Veterans cannabis treatment in 2014 to lower recreational drugs and alcohol use. As the patients were acquiring marijuana from a medical source only, the doctors were able to ensure that the patients were consuming the correct strain of marijuana in its purest form and the practice led to healthier patients.

Before deciding on Medical Marijuana as a medication or with any other medicines, a patient must consult the medical doctors to confirm the effects of consumption of medical marijuana and its risk factors. The possible risk factors of consumption of medical marijuana with any other medications may include lower Blood pressure levels, fainting, dizziness, and increased heart rate. A patient must consult a medical doctor before consuming Medical Marijuana to treat a debilitating health condition and follow the prescribed dosage. 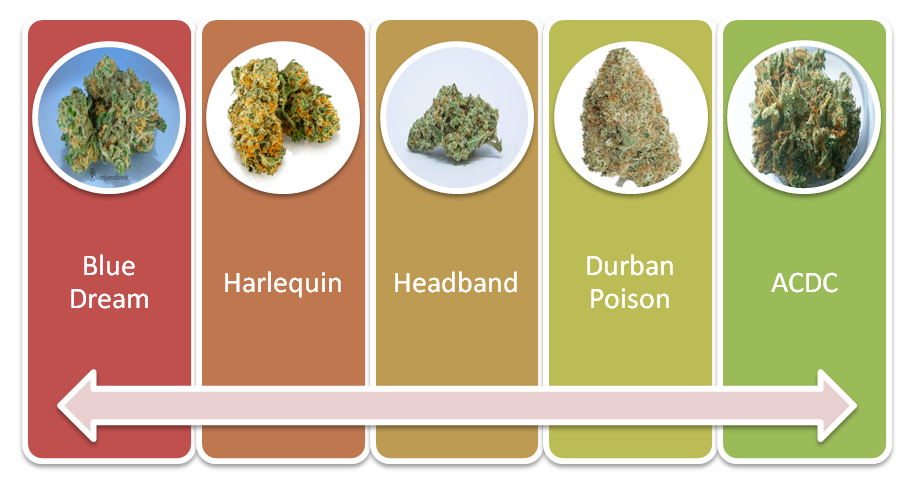 Blue Dream is a prevalent medical cannabis strains. Being a perfectly balanced hybrid strain, it is well-known for its long-lasting and euphoric high. It is a well-suited strain for experienced as well as newcomer cannabis users. For dealing with PTSD, Blue Dream strains’ mellow and euphoric high is well-admired for leaving a positive impact on the patient’s mood, especially for those dealing with depression and anxiety symptoms.

Harlequin is a well-admired cannabis strain for its always high CBD content. It includes a decent of THC, and the ratio of CBD and THC is 5:2. This ratio is considered an excellent balance rate for the patients living with PTSD due to its high CBD content that leaves mood-stabilizing effects. At the same time, THC facilitates fending off the nightmares that frequently terrorize PTSD patients. It is an excellent strain for medicating during night and day.

The headband is an Indica dominant hybrid cannabis strain that manifests in a body-high and healthy mind. Its THC potent is adequate for relaxing the mind and helps patients with PTSD skip the sleep stage where nightmares occur. It is preferably used during the late afternoon or before bed.

Durban Poison is a high-energy cannabis Sativa strain that is well-known for its productive and clear-headed high. It has reported successful help with energizing people and social anxiety and can be considered a natural way of treating the symptoms. Durban Poison is a pure Sativa strain; you must take it slow initially and work upon a higher dose late than the medical doctors prescribe.

ACDC is an ideal marijuana strain that must consume during the day when calm, focus, and productivity are required. ACDC consist of 20:1 CBD to THC ratio that allows the strain to impart increased relaxation and mind and body productivity. ACDC can be an excellent start for PTSD patients who are new to marijuana.

Tips for safe use

Suppose you’re curious about trying Medical Marijuana for anxiety, depression, or any mental health issue. In that case, you can do a few things to diminish your risk of deteriorating your mental health symptoms.

Go for CBD over THC:

If you’re new to Medical Marijuana, begin with a product that comprises only CBD content or a much higher ratio of CBD content than THC. Don’t forget that if you are a beginner, higher THC levels tend to make anxiety symptoms worse.

Initiate with a low dose. Give it sufficient time to work before consuming more.

Purchase marijuana from a dispensary:

A well-trained staff can proffer assistance based on the symptoms and medical condition you seek to treat. Purchase from state-licensed dispensaries with a valid recommendation from a Medical Doctor. Make sure that you purchase the precise quantity and the recommended strain best for your health condition.

Marijuana can act together with or lessen the effectiveness of prescription and over-the-counter medications, together with vitamins and supplements. It’s best to let your medical health provider know if you’re using medical marijuana.

If you’re working with a Medical Professional, ensure to loop them in, too. They can facilitate you in evaluating how well it’s useful for your symptoms and offer additional guidance.

As the research is still in its developing phase and the researchers are still exploring the benefits of Medical Marijuana, Medical Cannabis can be an effective remedy in relieving the PTSD symptoms like anxiety, depression, and many more. But before deciding on the Medical Marijuana treatment, a patient must take a recommendation from a licensed medical doctor and share the need for having access to it. If you are seeking some Medical help, then My MMJ Doctor can be the answer for you. Acquire your Medical Marijuana Card from a legitimate service provider and get legal access to Medical Marijuana for treating your underlying debilitating health condition.