Why Is Medical Marijuana Not Regulated as Most Medicines Are?

Home » Why Is Medical Marijuana Not Regulated as Most Medicines Are? 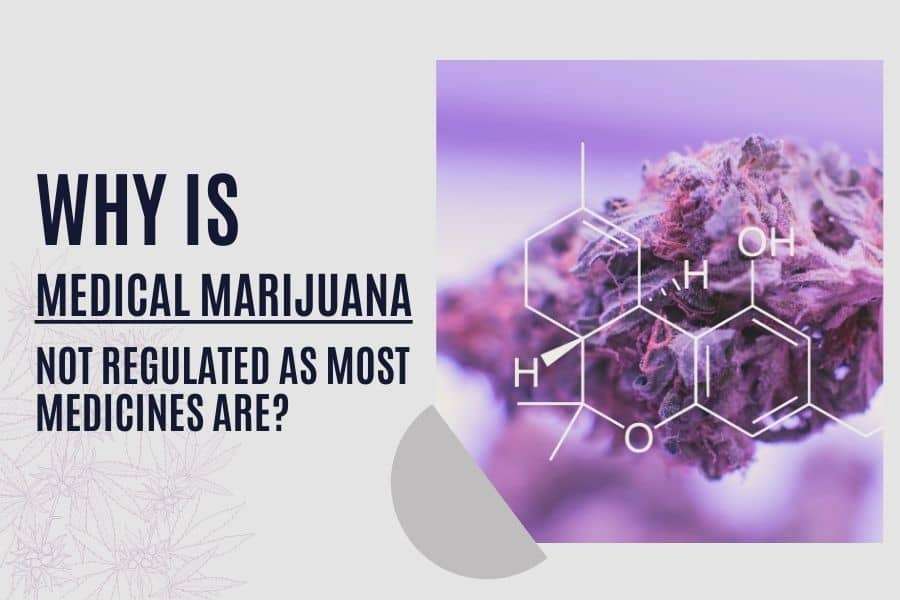 Medical Marijuana is one of the illicit drugs that have got the most controversial status. Being a plant with curative properties, people are still skeptical about its efficacy due to its high-feel properties. Even when Marijuana is getting legalized in several states, people are still worried about choosing it as a treatment. Even though the doctors are recommending marijuana treatment, people still have second thoughts. That is an obvious thing to think about the treatment twice.

People often ask out of the safety concerns, and the frequently asked question is if Medical Marijuana is a health beneficiary, then why does it require legal permissions to access? Why it is not regulated as most medicines are. Well, to give you a clear vision on this, we have compiled everything here only.

Experts in many specialties said that Medical Marijuana helps relieve the debilitating health condition’s symptoms. In contrast, several studies are still in the initial phase that is yet to confirm the efficiency of Medical Marijuana to treat medical conditions. But the point that is still to focus on is why it is not regulated. Let us see first how its medicinal effects started unleashing, and by the end of the blog, you will get familiar with the reasons for the query.

As per a study, Dan Shapiro was the first person who used Medical Marijuana in 1987 at Vassar College. He was suffering from Hodgkin’s lymphoma with potent chemotherapy, causing side effects like severe nausea and vomiting. When Dan’s mother got to know that Marijuana can relieve the distressing side effects of the chemotherapy, to help her son, she planted a garden full of weed in the backyard.

Later on, Marijuana as a medicine has become a national phenomenon and got widely accepted after realizing the health benefits it. Although the chemical-rich plant widely known as Cannabis Sativa remained a federally controlled substance, it is increasingly getting legalized in several states.

Though Marijuana has been seen exclusively as an abused drug, in the early 20th-century Cannabis was used as an adequate sleep and analgesic medication. Being so effective and natural remedy to treat several health conditions, we have concluded that the likely reasons for which Marijuana is not regulated like other medications may include:

A doctor’s recommendation will help patients to get a Medical Marijuana Card within their state that is the standalone document that provides legal access to it. But instead of choosing the manual process, a patient can quickly get it from the comfort of their home.

The three points mentioned above can be the primary safety concerns that lead to the controversial status of Marijuana. Scientists who study the marijuana plant and its effects on the body largely agree about its potential benefits and the risks posed by it. Even the other medications require safe consumption, and the same is the case with the curative plant and its products.

As far as the regulation of Medical Marijuana is concerned, safety concerns can be the primary reason behind the confined use and controversial status. However, a patient can have access to medical marijuana treatment with the doctor’s recommendations. A doctor’s recommendation will help patients to get a Medical Marijuana Card within their state that is the standalone document that provides legal access to it. But instead of choosing the manual process, a patient can quickly get it from the comfort of their home. My MMJ Doctor is a well-admired platform that has excelled in providing legitimate services online so that you can get the very best from the comfort of your home. Obtain a Medical Marijuana Card to legally access the curative plant’s health benefits and reward yourself with paying the lower taxes.